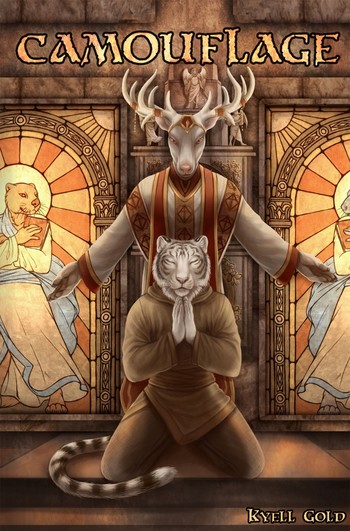 Another anthropomorphic web novel by acclaimed author Kyell Gold, connected to his Out of Position series (and, consequently, to the Forrester series as a whole, including Dangerous Spirits).

In France, young bisexual white tiger Danilo just receives news of his cousin's Coming-Out Story. Already bullied for being an anglophone in a french speaking country, this obviously doesn't go well for him. Already uncomfortable with his attraction to men and uncaring about LGBT struggles, Danilo gets pissed off at his cousin for unwittingly causing him to be mocked, and almost decides to cut ties with his friend Taye, a mouse who loves him and who he, too, is somewhat attracted to.

Then his cellphone falls into the Saone, and as the river floods over, Danilo wakes up back in time in 1508 A.D.. Thrust into the brutal, disgusting medieval environment, Danilo is forced to confront a dangerously homophobic world. The race is on for him to return home, and to save Luc, a gay otter condemned for his sexuality.

Divided into 66 parts, the novel's chapters were posted from June 2013 to February 2014. You can read it on Kyell's FurAffinity page or on his website