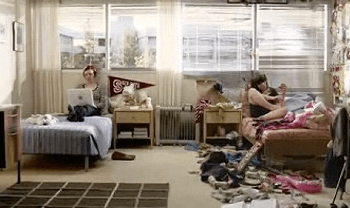 Those roommate preference forms? They're just for the illusion of control.
"According to the philosopher, Ly Tin Wheedle, chaos is found in greatest abundance wherever order is being sought. It always defeats order, because it is better organized."
— Terry Pratchett
Advertisement:

Bored of the age-old battle of Good versus Evil? Want something new to spice up your setting and throw your readers in confusion? Fear not! Cosmological Forces R Us has brought you the brand new dichotomy: Order versus Chaos.

Using it in a setting allows you to have two sides, in a similar way to Good and Evil. While the most traditional works have assigned Order to Good, and Chaos to Evil, inversions of this are also common: often, you'll find a Chaotic Good band of rebels fighting against a Lawful Evil empire (Common enough it's becoming its own trope). In another take on the subject, true goodness is seen as the balance between the two forces, and both Order and Chaos are portrayed as evil when they are taken to their extremes.

Order, sometimes called Law, is associated with civilization, authority, rules, protection, the status quo, tradition, and, when stretched to its extreme, mindless obedience, totalitarianism, and abuse of power. It's quite common to depict what happens when Order takes their laws and oaths just a little too far, but also don't be surprised to see The Good King portrayed positively. When they have powers associated with them, it's often leadership, The Virus, Brainwashing, and the power to bind with rules and oaths. When used as a villain, he's likely to say "We Have Reserves."

Chaos is associated with change, The Trickster, free will, creativity, individualism, and, to the extreme, madness, savagery, solipsism, and selfish overindulgence. The powers associated with it are Shapeshifting, illusions, and matter transmutation, as well as Entropy and Chaos Magic in general. By nature, Chaos tends to be too disorganized to pose a serious unifed threat like Order, and may engage in an Enemy Civil War or find its members Divided We Fall. On the other hand, the forces of Chaos are the hardest to predict.

They're sometimes Anthropomorphic Personifications, struggling with the whole world at stake, and don'tcha know, the hero's just the one that's got to pick between one or the other to serve or choose neither one and keep them balanced because Both Order and Chaos are Dangerous. When they're not actual forces, they're broad themes represented by the agenda of specific groups of people.

Rarely is it brought up that by sorting the world into clearly defined categories of Chaos and Order, the trope inherently skews itself in favor of Order. It's also generally vague as to why the forces of discord and chaos are regimented and disciplined enough to have actual Forces of Chaos. Naturally this only applies to absolute, cosmic-level order and chaos, not human individuals who tend toward one or the other because humans are a diverse lot. Incidentally, this skews the trope in favor of Chaos, as does the very fact that there is a conflict between order and chaos in the first place.

When classifying people as one or the other, three factors tend to get elided into one:

There can also be a mixture within one character. For instance, a hero who flies by the seat of his pants can nevertheless believe in an orderly universe and support his society more or less according to whether it is in harmony with the greater order. Conversely, an obsessive-compulsive character may be reacting to his belief that the universe is chaotic, and society no better.

See also Character Alignment, where this is a major factor. See also Alike and Antithetical Adversaries for other variants on this conflict. Can often be involved with the dilemma of Harmony Versus Discipline. Visually represented on a smaller scale with Slobs Versus Snobs. Also not uncommon in Odd Couples.

Due to the Time Variance Authorities' job to preserve The Sacred Timeline and to prevent Nexus Events from branching off into alternate timelines Loki and Mobius have differing views of the nature of the beautiful Chaos of Free Will versus the perfect Order of Fate.

Example of:
Sliding Scale of Free Will vs. Fate

Due to the Time Variance Authorities' job to preserve The Sacred Timeline and to prevent Nexus Events from branching off into alternate timelines Loki and Mobius have differing views of the nature of the beautiful Chaos of Free Will versus the perfect Order of Fate.