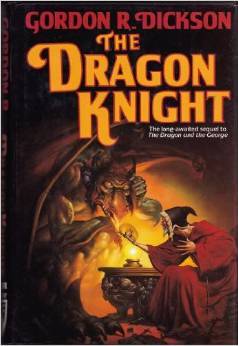 No one said that being a dragon was easy, or a knight, or even a mage, let alone a Dragon Knight / Magic Knight.
Advertisement:

The Dragon Knight series is a series of fantasy novels by Gordon R. Dickson. The first book was loosely adapted into the 1982 animated movie The Flight of Dragons by Rankin/Bass. A shorter form of the first book was previously published as a short story, "St. Dragon and the George".

The books tell the story of Jim and Angela Eckert, two college graduates who are whisked away to another dimension that is nearly identical to that of Medieval England, except there's wizards, dragons, and fairies running around and everyone speaks the same language.

In the first book (The Dragon and the George) Jim Eckert is trapped in the body of the dragon Gorbash, and must rescue his wife from the Dark Powers, who are attempting to wrack the fabric of the world's space and time. Along the way, Jim meets Sir Brian, a valiant knight; Silvanus Carolinus, the world's most powerful and crotchety wizard; Daffyd Ap Hywel, the world's greatest archer and a proud Welshman; Smrgol, Gorbash's great-uncle; Aragh the fearsome yet practical talking English wolf; and Secoh, a cowardly miniature dragon. Jim poses as a Baron from America to gain the trust of the local Englishmen.

Jim succeeds in rescuing Angela from the Dark Powers, and the two of them chose to stay in the new world. As a reward, Jim is granted a modest Barony, where he plans to contentedly live out his days — until the magical energy his deeds had earned overflows, forcing him to undertake the study of magic to control it. Because of his powers and the fact that Jim is bringing 20th century technology and knowledge to a medieval world, the Dark Powers continue to target him in an attempt to use him to tip the balance between Chance (chaos) and History (stasis).

In later books, Jim is also accompanied by Sir Giles (a selkie knight), Hob (the hobgoblin of Jim's castle), and usually unwillingly involved in the affairs of Prince Edward Plantagenet.

Novels in this Series

See also The Flight of Dragons, which was in part very loosely inspired by the books.