This page contains unmarked spoilers for the Jurassic Park film trilogy. You Have Been Warned! 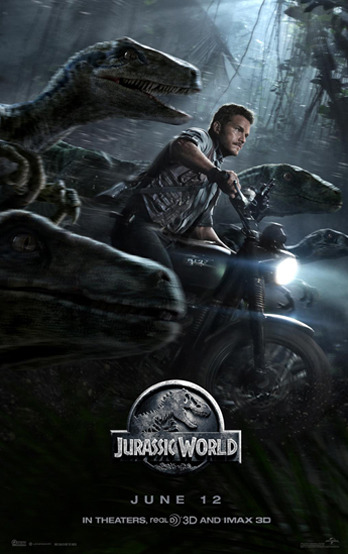 Jurassic World is a 2015 American Science Fiction Adventure film and the fourth film in the Jurassic Park franchise, released fourteen years after Jurassic Park III. It is the first of a revival era in the series, still following the continuity set by the three previous films. Colin Trevorrow directed it, while Steven Spielberg remained on as an executive producer. Like the third film, it uses concepts and characters created by Michael Crichton, but is not directly based on any novel of his.

Twenty-two years after the disastrous events at Isla Nublar in the first film, the late John Hammond's dream has finally come to fruition: the island now hosts a fully-functioning, popular, hardly-deadly-at-all theme park with dinosaurs, run by the Masrani Corporation, of which Hammond's InGen is now a subsidiary. However, the public has gotten used to the idea of cloned dinosaurs and attendance is slowly declining. Simply introducing new species to the park isn't enough anymore. Therefore, the latest attraction to be brought in isn't just a new species—it's a genetically modified hybrid created by the park's asset development team. And then it backfires disastrously, as the park's ventures always do...

Chris Pratt stars in the male lead role of Owen Grady, an ex-Navy man hired to study the behavior of the Velociraptors, and Bryce Dallas Howard as the female lead and park operations manager, Claire Dearing. The film also stars Irrfan Khan as Simon Masrani, the new owner of the park after the death of John Hammond, and Vincent D'Onofrio as the main human antagonist and head of the security staff, Vic Hoskins. Zach and Gray Mitchell are Claire's nephews and the main kids played by Nick Robinson and Ty Simpkins. B.D. Wong is the only actor reprising his role from the original trilogy, as geneticist Dr. Henry Wu. Other actors for the movie include Omar Sy, Brian Tee, Judy Greer, Katie McGrath, Lauren Lapkus and Jake Johnson.

was released on November 25, 2014, and the movie opened in American cinemas on June 12, 2015 (slightly earlier elsewhere). It also has two separate Viral Marketing websites, one

the "official site" of the Jurassic World park itself, another

A sequel, Jurassic World: Fallen Kingdom, was released on June 22, 2018 and is the second film in what Trevorrow intends to be a new trilogy based on the Jurassic Park franchise. A third film, officially titled Jurassic World Dominion, was released in June 2022.

In June 2018 a prequel novel The Evolution Of Claire was released that is set prior to the events Jurassic World that centers on the character of Claire Dearing. An animated series, Jurassic World: Camp Cretaceous began airing on September 18, 2020, detailing the adventures of a group of children who were camping at Jurassic World during the time of the movie's events. A ride, the VelociCoaster, opened on June 10, 2021, and takes place prior to this film, while the dark ride Jurassic World Adventure also opened in September that same year, serving as a loose adaption of this film.

Please move any character tropes (including dinosaurs) to the proper characters sheet.