Nature Is Not a Toy 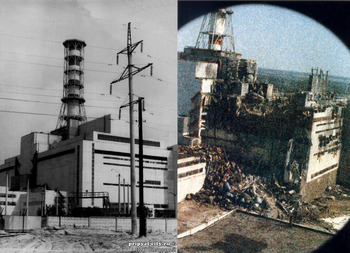 Amazingly, nuclear power is beneficial, unless arrogantly mishandled.
"For a successful technology, reality must take precedence over public relations, for nature cannot be fooled."
— Richard Feynman, Report of the Presidential Commission on the Space Shuttle Challenger Accident
Advertisement:

If there's one unequivocal, absolute truth about nature, it's how immeasurably powerful it can be. From something as simple as a raindrop to as powerful as a hurricane, nothing happens in nature that doesn't have far reaching consequences, for better or worse. And the same can be said for the very forces that have shaped the universe since its creation, only such applications multiply by a immeasurable margin on the cosmic scale. However, as technology and civilization continue to advance, the resources necessary to fuel both increase as well. Naturally, as science will be quick to tell you, the best way to keep up with such demands is not only to look at nature for inspiration, but to harness its power, especially where energy is concerned.

There are two ways this can go down. The first is to simply safely handle such power by strictly adhering to the protocols and instructions given by those who've done the necessary work and research. This way, the end result is something that is undoubtedly immensely beneficial to civilization, and in some cases, actually quite harmless.

The other is to ignore the experts, cut corners in the design, hire inexperienced staff, and/or completely overestimate your ability to control it. After all, you're harnessing one of the many natural forces in the universe that have governed it and everything in it, from the smallest atoms to supermassive black holes and all life in between, so there's no possible way it could go wrong and result in the massive loss of life, right?

This trope is not necessarily restricted to any one form of natural phenomenon. Nor does it matter if the person harnessing/manipulating the forces of nature does so with magic or technology. Whether the work involves the use of gravity, light, genetics, nuclear energy, etc., for any conceivable purpose, this trope will only apply if at least the benefits are discussed while the plot explores the consequences, or vice versa. And, for obvious reasons, it must involve a naturally occurring phenomenon within the observable universe (unless dark matter or dark energy is involved).

A subtrope of Nature Is Not Nice. Can go hand-in-hand with a Green Aesop. When done without properly doing the research, it can result in a Space Whale Aesop.

Can lead into Tempting Fate and Gaia's Vengeance, especially if nature in the setting is sentient, or there's a nature deity around.

Expect mad scientists to be frequently involved and abusing the naturally occurring phenomenon, until or unless it crosses a line even they are uncomfortable with.

Compare Creating Life Is Bad for a similar aesop about playing with forces that some may say belong to God alone. Also the more general Science Is Bad and because Lightning Can Do Anything, harnessing its power can sometimes open the road to decidedly unnatural horrors.

Supertrope to The Power of the Sun.