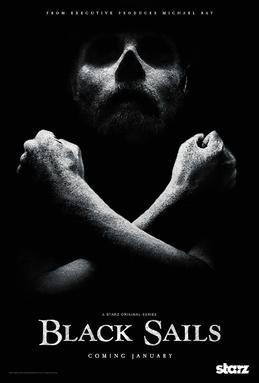 A pirate's life for me.
Advertisement:

Black Sails is a historical drama created by Jon Steinberg and Robert Levine that aired for four seasons, from 2014 to 2017, on Starz. Intended as a prequel to Treasure Island, the series focuses on Captain Flint, his allies and his rivals during the Golden Age of Piracy, their relentless pursuit of the gold that will one day become Flint's treasure, and their ongoing war with ‘civilized society'. It's a good deal Darker and Edgier than Pirates of the Caribbean and its like, and it took up the mantle of Starz's signature show after Spartacus reached its end.