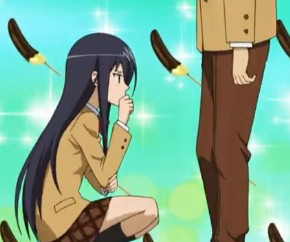 Fascinating...
Tony Stark: Ah, Mr. Rogers, I almost forgot... That suit did nothing for your ass.
Steve Rogers: No one asked you to look, Tony.
Tony Stark: It's ridiculous.
Scott Lang: I think you look great, Cap'. As far as I'm concerned, that's America's ass! [salutes the ass]
— Avengers: Endgame
Advertisement:

The Female Gaze is a Gaze trope about the way a work is presented from a female perspective or reflects female attitudes, either because of the creator's gender or because it is deliberately aimed at a female audience. Although looking at sexy men can contribute to it, Female Gaze is not restricted to that but is more importantly about the expectations of how the (presumptive) audience relate to the work.

Female Gaze is a Distaff Counterpart to Male Gaze. It is generally less common than its Spear Counterpart, and this is largely believed to be due to Most Writers Are Male.

Melana announces that the basketball game that she's refereeing is shirts vs skins and watches the Hunks take off their shirts.

Melana announces that the basketball game that she's refereeing is shirts vs skins and watches the Hunks take off their shirts.