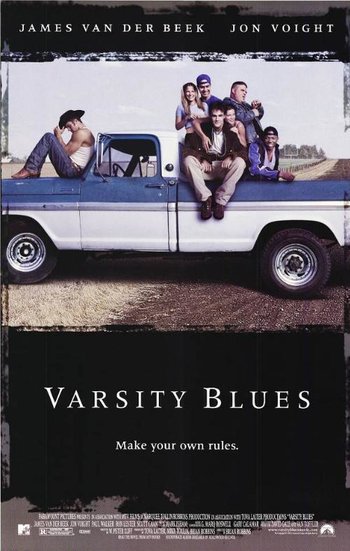 "Football is a way of life."
— Jonathon 'Mox' Moxon
Advertisement:

Varsity Blues, a 1999 comedy-drama directed by Brian Robbins, is one of the great Cliché Storms of the 1990s. It is a sports story that centers around high school football in the great state of Texas.

The film revolves around the fictional small town of West Canaan, Texas; its high school football team, the Coyotes; and the team's head coach, Bud Kilmer (Jon Voight). Kilmer has won more than 20 district championships and two state championships; as such, the stadium is named after him, and a giant bronze statue of Kilmer has been erected in the end zone in his honor. However, the questionable lengths he goes to win these championships begin to surface after his star quarterback Lance Harbor (Paul Walker) goes down with a season-ending injury, prompting a conflict between Kilmer and the team's academically-minded backup quarterback, Jonathan "Mox" Moxon (James Van Der Beek).