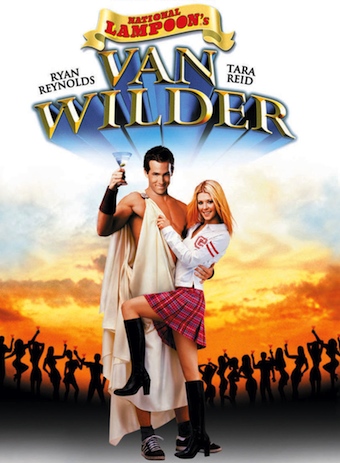 The charming Van Wilder (Ryan Reynolds) has attended Coolidge College for seven years and knows all the ins and outs of student life at that college. He's upbeat, throws the wildest parties and is pretty much just an all-around awesome guy loved by all. Van is just simply...the man.

After a series of comedic incidents, his father finds out that Van has been wasting his life at college and cuts him off from the college fund. Now Van has only a few months left to graduate and win the heart of a journalism major Gwen Pearson (Tara Reid). However, she's dating an arrogant medical student who is trying to get Van expelled. Hilarity Ensues.

The 2002 film is another entry in the National Lampoon movies. While it had a low budget and negative critical reviews, Ryan Reynolds was praised for managing to pull off the silly gags with flying colors, and it did pretty well at the box office. Unfortunately, it spawned an even less successful spin-off sequel Van Wilder: The Rise of Taj and a direct-to-DVD prequel Van Wilder: Freshman Year.