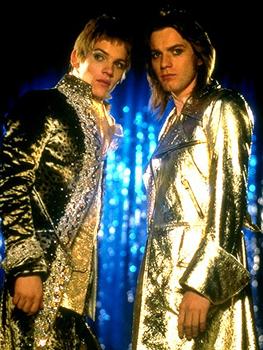 Slade and Wild in two of their tamer costume choices.
Advertisement:

A 1998 film by Todd Haynes about a bisexual pop star and his meteoric rise to fame during the Glam Rock movement of the 1970s. It's absolutely not about David Bowie. The film centers on Brian Slade (Jonathan Rhys Meyers), whose outer-space alter ego, Maxwell Demon, is in no way Ziggy Stardust. His band, the Venus in Furs, are most definitely not the Spiders from Mars. Throughout his life, Slade falls in love with a series of people who in no way resemble Angie Bowie, Iggy Pop, Lou Reed, Mick Jagger or Brian Eno.

Years later, a journalist named Arthur Stewart (Christian Bale) is researching the disappearance of Slade after a catastrophic failure of a publicity stunt at a concert. Apparently fans aren't forgiving if you fake your own death. So Slade fell into alcohol, drugs, and depression and dropped out of sight completely. Arthur starts by interviewing Slade's former friends and lovers, while also musing on his own youth and the impact of the glam rock scene on his life and sexual identity. The film is thus told in a series of flashbacks, mostly linearly, leading up to Slade's disappearance.

Contrary to popular belief, the film was not originally intended to be explicitly about David Bowie. Bowie's involvement with the project was based on whether or not his songs would be used, which ultimately didn't happen because he disliked the script.