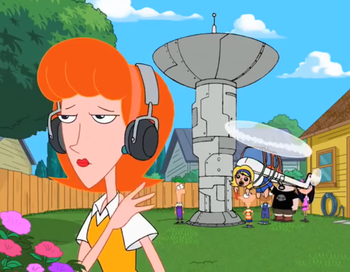 Definitely not a helicopter parent.
"Open your eyes, Mom! What do you think has been going on for the past two years? The fights, the weird occurrences. How many times have you washed blood out of my clothing, and you still haven't figured it out?"
— Buffy Summers, Buffy the Vampire Slayer
Advertisement:

Parental Obliviousness would be best described as a subtrope of Adults Are Useless.

The kid is either trying to tell the parent something or trying to hide something, but the parent misses this completely, as well as other significant cues about their child's state of mind or personality.

Sometimes the parents are oblivious because there's something going on and the parent is a Muggle who can't know because s/he isn't Secret-Keeper. Or perhaps the Extra-Strength Masquerade seems to be hitting them especially hard.

Sometimes it's just a mundane reason for the cluelessness, like work causing mom or dad to be absent too much. Occasionally, it's a case of the parent thinking too much and not being able to see the forest for the trees; or the parent not wanting to see and going deep into denial. And sometimes the parent is actively contriving to not know something they consider brain breaking. Denial is handy to maintain obliviousness.

Usually the trope is played for comedic effect, and often in animation to allow child or teenage characters to go off adventuring without their parents knowing and freaking out about it. (The alternative being the parents not being there.)

There's often a scene where the kids are in trouble and the parents finally find out and ask why did the kids not come to them about it. To that, the parents are always stunned to hear that their own children fear their reaction more than the trouble itself and cannot understand how their role in family discipline made them an object of fear that helped allow the problem to escalate into a crisis.

The flip side is Open-Minded Parent, where they figure out what their kid is up to... And seem strangely untroubled by it. Compare and contrast with Mama Bear, who knows what's happening in her child's life, and nothing will hurt her child. Then there's the Reasonable Authority Figure, who may not believe everything they hear, but will invariably hear them out and humor them. Parental Obliviousness is often required for a Don't Tell Mama or Batman in My Basement situation to work, or at least helps it along. This trope has an older, more senile relative in Grandparental Obliviousness.