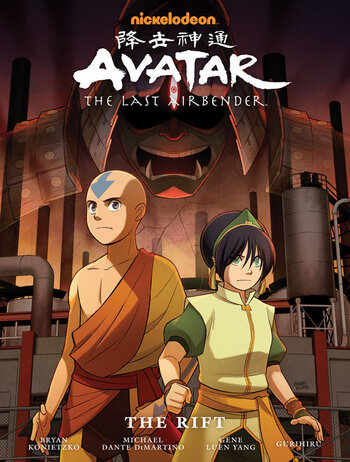 The third trilogy of Interquel comics between Avatar: The Last Airbender and The Legend of Korra. This trilogy shifts focus back to Aang and the foundations of Republic City, as well as Toph, who was absent from the previous trilogy.

After the Yu Dao situation is finally brought under control, Aang receives visions of the previous Air Nomad Avatar, Yangchen, who tries to talk to him but is mysteriously inaudible. However, her appearance does remind Aang that it's time for the Air Nomad holiday held in her honor, and he takes Katara, Sokka, Toph, and the Air Acolytes to celebrate it for the first time in a hundred years.

Unfortunately, the island where the celebration used to be held is now the site of a joint Fire Nation and Earth Kingdom mining operation, and the environment is in bad shape, though the current supervisor Satoru insists it's unrelated. Aang is now sure that Yangchen was trying to get him to shut the mine down, but things quickly get much more complicated, as Toph in particular is sucked into the conflict in a rather unusual way.

The first part of a sequel trilogy, Smoke and Shadow, was published September 23, 2015. It focuses on Zuko dealing with a rebel faction of Fire Nation citizens calling themselves the "New Ozai Society."

The Rift provides examples of: