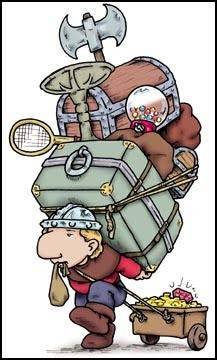 The role for someone overqualified to be an adventurer.
"I am sworn to carry your burdens..."
— Lydia, The Elder Scrolls V: Skyrim
Advertisement:

When a character is shown to be the personal carrier on which all other members of the traveling party dump their belongings onto, much to that person's chagrin and everyone else's amusement. The person in question usually does not possess Super (or even above-average) Strength, so the experience is usually an unenjoyable one for them. On the other hand, sometimes the guy is all too happy to demonstrate his strength to onlookers.

Seen often in episodes where the women take a man shopping with them — the man almost always carries the shopping bags.

Compare Lots of Luggage. In video games, this is one possible variation of a Utility Party Member.