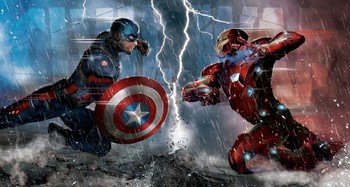 Whose side are you on?
"There are few wars between good and evil; most are between one good and another good."
— Yang Wen-li, Legend of the Galactic Heroes
Advertisement:

It's hard to create a story where both sides are fully sympathetic and yet in a real conflict with each other.

This can be a philosophical struggle where Lawful Good and For Great Justice stand against the forces of Chaotic Good and For Happiness. In this case, the conflict is often between a Hero Protagonist and a Hero Antagonist; which is which depends on from whose perspective the story is being told (with Chaotic Good usually as the protagonist in democratic societies). It can also be when unambiguously good characters find themselves on different sides of a Grey-and-Gray Morality conflict. In either case, they are often reluctant to fight each other but can have a hard time understanding each other's point.

Expect to find one or more Always Lawful Good races in such stories. This can tie into the philosophical struggle of what it means to be "good". As such, it can overlap with To Be Lawful or Good, where the conflict is doing the morally correct thing vs. following the ethically correct rules.

Compare with Both Sides Have a Point, Idealist vs. Pragmatist, Your Terrorists Are Our Freedom Fighters, Utopia Justifies the Means, Fighting Your Friend (assuming both are good) and Let's You and Him Fight. Contrast to Black-and-White Morality and Evil Versus Evil.