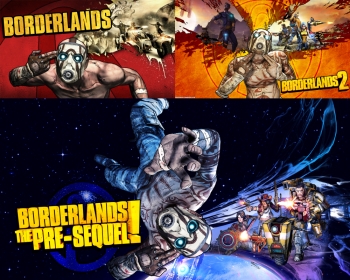 The sequel just got PREQUELIER!
Timon: Waaaait, wait wait wait, hold on a second. Three? What's with the three? No, no, no, the three has got to go.
Pumbaa: Timon, you can't use Two! There's already been a Two!
Timon: Mmm, you've got a point there, big fella. It's not a sequel, anyway.
Pumbaa: Yeah, more like a Behind-the-scene-quel!
Timon: A what-a-who-quel?
Pumbaa: Oh, you know, an Inbetween-quel!
— The Lion King 1½; teaser

note The ironic fact being that some countries saw the release of the film with the 3 still on the end.
Advertisement:

Also called a Midquel, this can be one of two things: when a new entry in a series is a sequel to one existing entry, and a prequel to another, or when it takes place during a Time Skip in an earlier entry rather than continuing the story. This device is often used to expand a portion of the story only touched upon in other entries, or if more story is desired but there's no logical place for it either before the beginning or after the end.

The two terms are sometimes differentiated, where an "Interquel" is referred to as an entry happening strictly between two previous ones of the franchise (i.e. Movie 3 takes place between Movie 1 and 2), while a "Midquel" takes place within a single work of the franchise (i.e. Movie 2 takes place within a Time Skip in 1). But continuity can sometimes be so convoluted (depending of whether it is an Immediate Sequel or not, or whether The Stinger overlaps with events from the other works), that establishing a work is in-between two others will usually suffice.

Compare Prequel, P.O.V. Sequel. Not to be confused with Simultaneous Arcs which is a story that takes place at the same time as another story, but focusing on different characters.