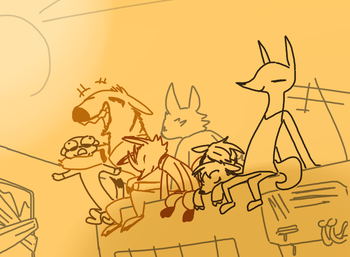 Pack Street is a series of Zootopia fan comics and stories by The Weaver.

You know Zootopia? A Shining City of interspecies cooperation in a World of Funny Animals, where "anyone can be anything"? Well, there's a Wrong Side of the Tracks there, too, and if you didn't already know there were predator/prey tensions, that's where you'll find out.

Enter Remmy Cormo, our protagonist, a mostly mild-mannered sheep with an open mind but his own preconceived notions and ignorance about other species. After renting in the only affordable area he could, he has to adjust to the cast of eccentric and varied characters that call the area home, and vice versa. Maybe he can learn something along the way, assuming he doesn't put his hoof in his mouth too badly before then...

The setting is ongoing, and has attracted some attention from artists such as Adam Bryce Thomas, best known for Sonic the Hedgehog (Archie Comics).

The comic Wannabite can be read here

The entirety of the written stories, including the chapters after "Wannabite," can be read on AO3

. A rougher draft that only goes up to the "Ruin" joke chapter can be found on Pastebin