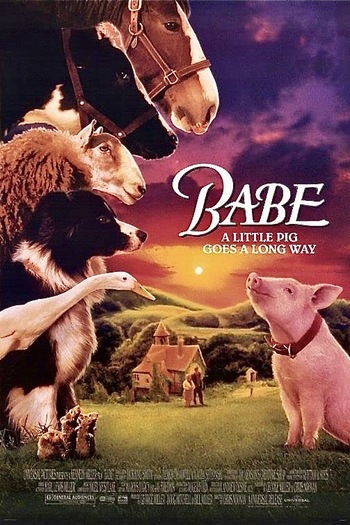 Babe is a 1995 fantasy comedy-drama film directed by Chris Noonan, adapted from the 1983 English children's book The Sheep-Pig (also known in the United States as Babe, the Gallant Pig) by Dick King-Smith.

It is the story of a little piglet ("Babe" to the other animals he encounters and "Pig" to all the humans — including the narrator) that gets plucked from his life as future bacon to become a prize at a fair, ending up on the sheep farm of one Arthur Hoggett (James Cromwell). The farm is quirky already, and taking in Babe — who's cared for by his "mother", the sheepdog Fly — only makes things stranger.

As it turns out, Babe is a kind and trusting sort who quickly befriends most of the farm animals, and uses his friendship to become an effective sheep herder. From there, Farmer Hoggett decides that instead of making Babe a featured part of the dinner table, he'll enter the little pig in a sheepdog competition.

While theoretically a children's movie, its offbeat charm and heartwarming (and remarkably Glurge-free) story made it a favorite amongst all ages. It even received seven Academy Award nominations including Best Picture, to the surprise of many... and the chagrin of the Academy, which made efforts to keep further "children's movies" from qualifying in the future. (Hello, Best Animated Picture category! Best Animated Picture says, "hi.")