Glad You Thought of It 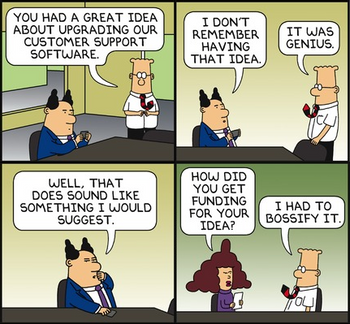 Maladict: I don't want to, you know, spoil the spirit of the moment, but that is a really awful idea. The el-tee won't agree to something as wild as that.
Polly: No, he won't. But he'll suggest it.
— Monstrous Regiment
Advertisement:

You know how the Glad I Thought of It trope is when a character suggests something, only to have another scoff at the idea, but then claim it to have been their own idea when it succeeds? Well, maybe there's a trope involving a character who has a plan, but wants someone else to think it's their idea and thus drops subtle hints about carrying out the plan under the idea that it was their idea to begin with. But it'd need someone to make such a page, and I can't think who...

You could have it contrasted with Hint Dropping, as that's when somebody tries something, but the second person fails to come up with the idea. Hypnosis or other means of Mind Manipulation can be another way to do this. See also Backstory Invader.

Gabriel suggests the idea of a fashion model award show to Audrey by pretending it was her idea. She promptly takes credit and goes with it.

Gabriel suggests the idea of a fashion model award show to Audrey by pretending it was her idea. She promptly takes credit and goes with it.