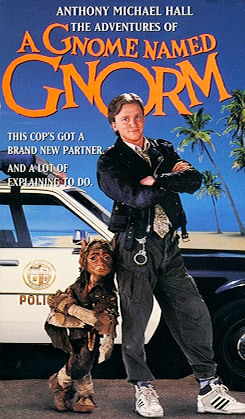 Also known as Upworld in some markets, A Gnome Named Gnorm' was a 1990 fantasy comedy film released January 17, 1992, directed by Stan Winston and produced by Interscope Communications, Lightning Pictures and PolyGram Filmed Entertainment.

So in the movie, Gnorm is just an average gnome—

Mm? Oh so it is, sorry. Okay, let’s try this again:
Wanting to impress some girl gnome he likes by committing a gallant deed, Gnorm steals the gnomes’ stones in order to recharge them via exposure to sunlight. Meanwhile, Manchild Detective Casey Gallagher is assigned to work on a sting operation with his partner that night at a park and is goofing off while waiting for the suspect to show. Upon arriving to the Earth’s surface where said sting operation is, Gnorm witness the murder of Detective Gallagher’s partner and the killer ends up with his stones. Detective Casey is blamed for the blotched sting and causing his partner’s death, so now he not only wants to clear his name but catch the killer, Detective Casey accidentally encounters Gnorm and both team up to get what they want along with Casey seeking the help of fellow detective, Samantha.