Our Gnomes Are Weirder 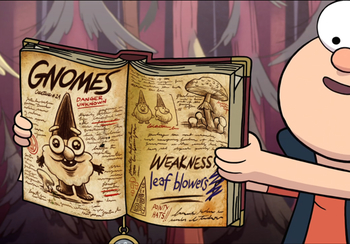 "Gnomes are not at all like garden gnomes, which are actually dwarves, a mistake that began in early fairy tales."
— Fantasy Encyclopedia
Advertisement:

Let's talk about gnomes, shall we?

Just what is a gnome? A short humanoid...how short? How humanoid? They're almost as diverse as trolls and nearly as widespread in fiction and myth.

The problem becomes greater in Dungeons & Dragons and other role-playing games, where they share conceptual space with at least two other "short" races, dwarves and halflings. As a result, gnomes tended to go unnoticed and forgotten in D&D settings; in fact, they were explicitly referred to as "the Forgotten People" in Forgotten Realms.

That began to change with the Dragonlance setting and the tinker gnomes of Mount Nevermind: descendants of humans cursed by the god of the forge for being petty and small-minded, the minoi shunned magic in favor of the sciences, particularly engineering...and were completely incapable of approaching these rationally, compelled to make everything they built as complicated and Goldbergian as possible, and valuing failure above success because you couldn't learn anything new once you'd got it right. Tinker gnomes were played for pure comedy, and proved fairly popular. Since then, engineering prowess has become a recurring trait for gnomes in various universes. Some of them are as inept as the original tinker gnomes, but other versions are actually much more competent.

Since then, the general trend has been to make gnomes distinctive by making them strange, standing out from their setting because they don't quite fit into it.

Note that while creatures with Gnome-like characteristics have been around for a very long time, the word Gnome as it's currently understood was originally used by the occultist Paracelsus to refer to Elemental Embodiments of earth. If a fiction includes elemental gnomes, they usually won't have much character depth or interaction, and may or may not follow this trope.