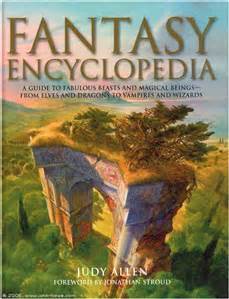 The cover depicts the perfect place to find many of the creatures within...
"A guide to fabulous beasts and magical beings, from elves and dragons to vampires and wizards."
Advertisement:

The Fantasy Encyclopedia by Judy Allen is a children's encyclopedia of numerous creatures and magic beings told in stories and myths. Contrary to potholes in the page quote, the book actually describes the origins of the entries and tells of them in their most traditional forms, and also compares those forms to the more modern depictions. A little over 130 pages long (not including the index or glossary) the book is filled with illustrations and descriptions of the creatures, as well as noting famous examples. Another feature of the book is a small box on certain pages that lists examples of the entries in books and movies, sort of like this site.

Contains a forward by Jonathan Stroud, author of the Bartimaeus Triology. Also serves as a Mythbuster by showing how people long ago crafted tales through exaggerated descriptions of actual animals or occurrences (i.e. the Manticore being a Tiger), but also leaves some events ambiguous to their true nature.

The entries are sorted into chapters, in this order:

This is not The Encyclopedia Of Fantasy from 1997.

open/close all folders
Tropes Applying to the Whole Book