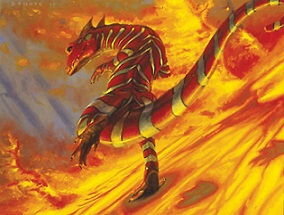 In fiction, it's not uncommon to see reptiles being associated with fire. After all, Dragons are often portrayed as reptilian, and it's common knowledge that they breathe fire. Plus, dinosaurs have often been associated with volcanoes and lava. Being cold-blooded, reptiles are more comfortable with warm climates, especially lizards, who like to rest under the sun, which is pretty much symbolic of fire. And let's face it, the concept of a giant lizard breathing fire, swimming in lava and living in volcanoes is just plain awesome.

The trope is named after the salamander, a mythological animal depicted as a fire-breathing lizard or a wingless dragon. Nowadays, the name is given to a real animal who actually isn't a real reptile, but a small amphibian with a lizard-like shape. However, alchemists would often attribute them mystical properties, such as the ability to survive fire, or even extinguish it by the mere coldness of their blood. As a result, the legendary counterpart of the salamander stayed in the memory, and has been raised to the rank of Elemental Embodiment of Fire, and also part of its subtrope, Alchemic Elementals.

The exact reason for all these stories and the length of times through which they survived is often theorized to be due to a behavior of Real Life Salamanders. Being amphibians, they seek to lair in humid locales, like stacks of wood kept outdoors. People would then use that wood to make fires, which would wake the Salamanders and cause them to flee for their lives, leaving people convinced the creatures had been "birthed" by the flames through abiogenesis. As wood remained a primary source of heating for humans till the industrial revolutions, such events, though rare, would keep reoccurring, ensuring that the myths of the fiery Salamander would live on.

Since Reptiles Are Abhorrent, expect a frequent association to Demons, Hellfire and Fire and Brimstone Hell. Exceptions do exist, however: a dragon or dinosaur-themed protagonist can sometimes be associated with fire as a way to reinforce his hot-blooded temper and bravery rather than his evil nature. Those exceptions seem to be especially popular in Japanese culture, where the connection of reptiles and dragons with evil isn't as strong as it is in Occident.

Note: Fiery Salamander is not to be confused with real life Salamanders which are actually amphibians that live in and around water. Also, this trope applies to reptiles and reptile-like beings as a whole, not just Salamanders.