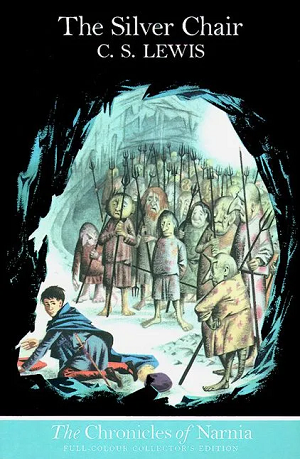 The fourth installment of The Chronicles of Narnia and the sixth book chronologically. A few months after The Voyage of the Dawn Treader, Eustace, with schoolmate and fellow outcast Jill Pole, returns to Narnia, and is sent on a quest to rescue Caspian's long-kidnapped son Rilian from a witch, who rules an underground kingdom preparing to invade Narnia.

It was adapted as a mini-series by the BBC in 1990, with no less than Tom Baker playing Puddleglum. A few decades later, a film adaptation was greenlit by The C.S. Lewis Estate and The Mark Gordon Company, with Joe Johnston attached to the project, but the movie was ultimately scrapped.

Not to be confused with the band of the same name, Silverchair.