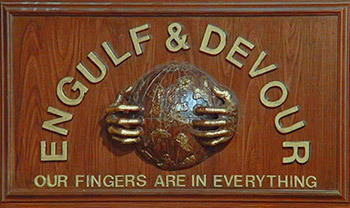 "A corporation is like a big, hungry monster. My job is to find smaller, weaker monsters for it to eat."
— Charlotte Pickles on her job at MergeCorp, Rugrats
Advertisement:

An evil large corporate retailer moves into a previously "unspoiled" area, and proceeds to try to drive all the pre-existing local "Mom & Pop" competition out of business, usually through a combination of price undercutting, bribery, and other shady business practices. Our heroes must now band together in an effort to save their beloved coffee shop/video store/bookstore from certain extinction.

Frequently depicted as offering inferior products, but at much lower prices. The person running this company is usually a Corrupt Corporate Executive. Sometimes even has some Screw the Rules, I Have Money! to avoid being punished, or to survive losing customers. If the company decides to buy up the local businesses once they fail, they may invoke Majority-Share Dictator.

Often employed as a Strawman Political to reprimand corporate businesses, but may sometimes be an accurate depiction of the dirty tricks that certain big companies use.

When considering whether an example would fit this trope or not, please keep in mind that simply having a large corporate entity in the story may not qualify it as a Predatory Business. The intention of this trope is that the large corporation's aggressive business tactics and the opposition to the corporation should figure in a plot or subplot. For situations where the corporate entity is more of a environmental detail or a mood-setting device, Mega-Corp or Bland-Name Product may be more appropriate.

Here's an example to use for comparison. Fox Books from You've Got Mail does not fit this trope. Yes, his company drove The Shop Around the Corner out of business, but they did it by simply selling their product in a competitive market, they did not engage in misconduct.

Not to be confused with Welcome to Evil Mart which is about companies and corporations that specifically cater to villains. Compare Community-Threatening Construction.