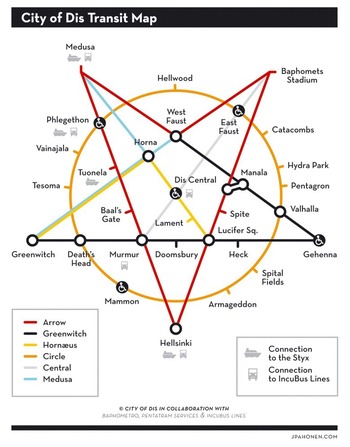 Dis: Birthplace of the Double Down

.
"[V]ery few people on the face of the planet know that the very shape of the M25 forms the sigil *odegra* in the language of the Black Priesthood of Ancient Mu, and means 'Hail the Great Beast, Devourer of Worlds'."
— Good Omens
Advertisement:

Sometimes the best way to conceal your hex, summoning circle, or glyph of protection is in plain sight using sheer scale. This is usually through some facet of a planned town or city, such as its walls, street layouts, sewers, and the like, but scale-wise, this can go from a single building to an entire country. The symbol usually passes unnoticed to all but a few or is completely forgotten, and is only discovered through either its blueprints or a bird's-eye view. Its appearance usually constitutes The Reveal.

It is a specific form of Bizarrchitecture designed to invoke mystical power, usually Geometric Magic that's Hidden in Plain Sight, such as a sealing spell for Sealed Evil in a Can that's buried underground or a protection spell for the location. The more dangerous forms are a kind of Malevolent Architecture that wreak eldritch havoc when activated. Worth mentioning that this can overlap with Connect the Deaths, if there is a mystical meaning behind several murder locations that somehow incorporates existing elements of a city's design. The key to this trope is that the shape itself is a spell on a monumental level.

Compare Crop Circles for other shapes visible from the sky. This is usually designed by The Conspiracy.