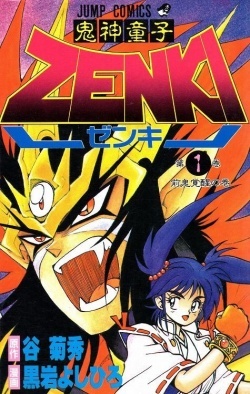 Kishin Douji Zenki (or Zenki for short) was a fantasy action manga by Kikuhide Tani and Yoshihiro Kuroiwa that appeared in Monthly Shonen Jump from 1992 - 1996. A 51-episode anime adaptation produced by Kitty Films note  This show being one of their last anime productions and animated by Studio DEEN aired on TV Tokyo in 1995.

Long ago, a priest called Ozuno Enno controlled Zenki and other powerful demons to defeat the demon goddess Queen Karuma. A thousand years later, when Karuma and her minions return, Zenki gets summoned by Chiaki Enno, a pigtailed Miko who is Ozuno's descendant.

Zenki and Chiaki now have to put up with each other and fight demons at the same time. The only catch? Zenki's been forced to become a little kid every time there's no threat around. So now he's gotta hang around Chiaki during her school days, as Karuma's threat expands around them...