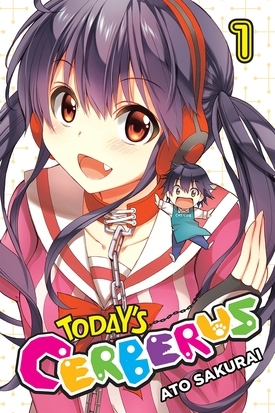 Today's Cerberus (Kyou no Keroberos) is a manga written and illustrated by Sakurai Ato. It ran in Monthly Shonen Gangan from 2014 to 2018.

For reasons he can't explain, ever since an incident in his childhood Chiaki Mikado has never been able to feel joy or have fun. One day he received a box from his globetrotting father. Inside is a girl who's happy to see him once again and introduces herself as Cerberus #1, Kuro. She declares he'll be his guard dog from that day forward.

There is more to this would-be guard dog than meets the eye. Not least of which is the fact that she is one of three personalities within the same body. Kuro, alongside the Hot-Blooded Shirogane and The Stoic Roze.

With Cerberus at his side, Chiaki tries to cope with day to day life while Kuro and her fellows learn more about the material plane in which they now find themselves.