Manga / Kiss Him, Not Me 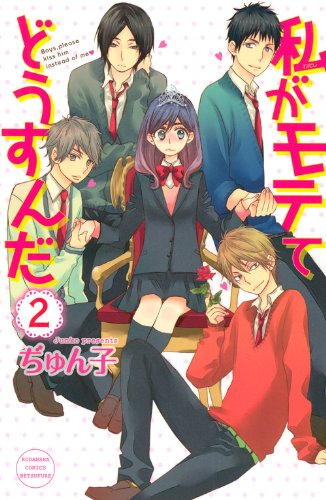 Kae Serinuma is a chubby second-year high schooler, avid otaku and Yaoi Fangirl who has accepted that she will never be one of the popular kids at school. She secretly ships two of her male classmates, and is perfectly comfortable with her life.

However, when her favourite anime character is killed off, she locks herself in her room for seven straight days and rapidly loses weight from grief and starvation. When she finally emerges, Kae discovers that her body has transformed into that of a conventionally attractive young woman, drawing the sudden attention of five classmates: the sporty Yuusuke Igarashi, the surly Nozomu Nanashima, the timid Hayato Shinomiya, the laid-back Asuma Mutsumi and Bifauxnen geek-girl Shima Nishina.

The bewildered girl finds herself in a new and unfamiliar daily routine as these suitors try to capture her heart while putting up with her weird hobbies, despite the fact that she'd rather see them all paired up with each other. Yes, this is a Reverse Harem series.

Kiss Him, Not Me (Japanese title: Watashi ga Motete Dousunda, lit. "What Should I do if I'm Popular"), also known as "Boys, Kiss Him Instead of Me", is the first shoujo manga by the popular BL mangaka Junko. It was serialized in Bessatsu Friend from 2013 to 2018, and compiled into 14 volumes. It's been licensed in the USA by Kodansha Comics USA.

The series has been greenlighted for an anime adaptation by Brains Base and Group Zen* with further assistance from Studio Comet, Lapin Track and Nakamura Productions. Crunchyroll streamed the subtitled version as it aired in Japan as part of the Fall 2016 Anime season, while Funimation created a SimulDub (formerly known as Broadcast dubs) for the series during the same simulcast season. Furthermore, a live-action film of the series was released in July 2020.

Not to be confused with Watashi ga Motenai no wa Dou Kangaete mo Omaera ga Warui, which stems from both series sharing a similar shorthand name (Watamote).

Now has a Character Page! Go check it out for more info on the characters!