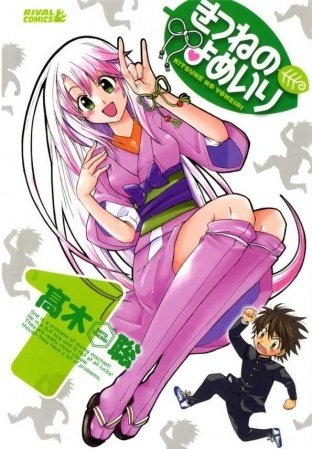 After tidying up a roadside shrine he comes across, Ousuke Hayama, a high school boy with the worst luck in the world, returns home to find a beautiful girl waiting for him who claims to be his new wife. The girl is Kyouka, the princess of the White Fox Kitsune, and due to the ancient customs of her clan she and Ousuke are now married. Although his greatest wish is to live a peaceful and normal school life, Ousuke finds himself drawn into a life of wacky supernatural beings, all the while trying to live with the pranks of his irrepressible wife.
Advertisement:

Kitsune no Yomeiri ("Fox's Wedding") is a supernatural romantic comedy manga by Takagi Satoshi, which was serialized in Shounen Rival magazine from 2008 to 2011.