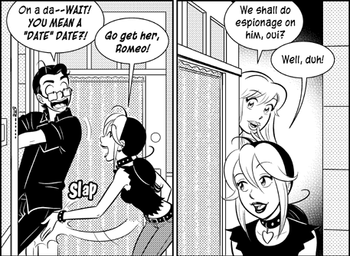 Homestar: Mainly, I just want to keep [Marzipan and The Cheat] from making out.
Strong Bad: Euw! The disgust! It won't wash off!
— Homestar Runner, "Date Nite"
Advertisement:

A mostly comedy trope. Two people are in the process of getting together and having a date. The more they try to keep it on the down-low, the more likely it is that everybody they know is spying on 'em... possibly with the specific goal of ruining the thing, which may result in a Bad Date.

Truth in Television, although perhaps not as common as portrayed in fiction. The peepers usually overlap with Shipper on Deck.