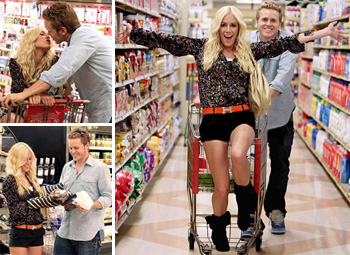 A staple trope of romantic comedies, chick flicks and sitcoms. A woman (usually a mother or a mother figure) who wants to spend some Quality Time with her protégé (usually, her daughter) takes the protégé out on a shopping trip, usually to The Mall — buying dresses and makeup, getting their nails done together, etc. The shopping trip is usually shown as a montage, featuring scenes such as:

See also Fashion-Shop Fashion Show. Villains Out Shopping doesn't actually have to involve shopping, but when it does, it's likely that it will involve a montage.