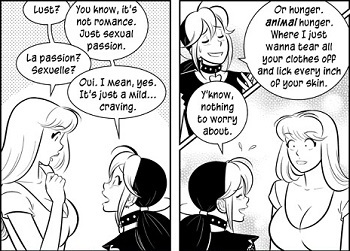 Kind of the kinky older sibling to the Love Interest. A lust object is a character who is actively lusted over by another.

While a character thinks about holding their Love Interest's hand, and shows a Luminescent Blush in their presence, he or she will regard a lust object with dreams of improbably risqué situations, and more often than not, The Nosebleed.

It's possible for a Love Interest to also be a lust object. However, this is usually not the case, as a lust object is rarely regarded as anything other than that — an object to lust over.

Note: A character who simply thinks "sexy" thoughts about their Love Interest is not regarding them as a Lust Object.

For a character to be a lust object, they must be thought of as "objects" to fulfill the sexual or proto-sexual desires of the luster, outside of (or in addition to) any romantic feelings. A good indicator is whether or not the Object speaks during the waking wet-dream. If they don't, or if they only use "stock" sex-scene phrases, they're probably a lust object. If they hold a conversation, or even just speak in coherent sentences, they are probably closer to a Love Interest.

They are often the object of a Stalker with a Crush. A guy who is Mr. Fanservice or a girl who is Ms. Fanservice is almost always this, on both sides of the Fourth Wall.

Compare Head-Turning Beauty for when the character is a lust object to everyone, usually Played for Laughs. Eating the Eye Candy is one way for a character to dwell on their lust object, while Male Gaze/Female Gaze is a way for the author/artist to emphasize that the Object is being fetishized.