Series / Part of Me 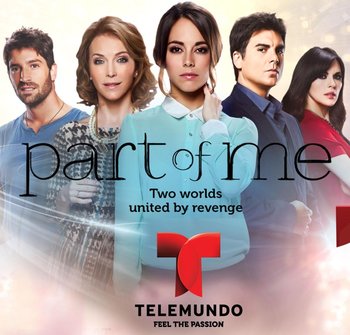 Part of Me (En otra piel in Spanish) also know as In Another Skin, is a Spanish-language supernatural Telenovela produced by Telemundo in 2014.

It is a loose remake on the 2005 Telemundo telenovela El cuerpo del deseo, which in turn is based on the 1992 RTI Colombia telenovela En cuerpo ajeno. The story chronicles the lives of two seemingly ordinary women who get wrapped up in a mysterious paranormal phenomenon when death comes knocking on their door.

Mónica Serrano (Laura Flores), a world-renowned pianist with an impressive fortune that lives in Los Angeles with her family, dies after the betrayal of her ambitious niece Elena Serrano (Vanessa Villela) and Gerardo Fonsi (Jorge Luis Pila). But by way of a mysterious talisman, Mónica's soul, which does not accept departing from this world, occupies the body of Adriana Aguilar (María Elisa Camargo), a young and modest waitress in Mexico City that had befriended Mónica and who died at the hands of a dangerous gangster around the same time.

Now inhabiting Adriana's body, Mónica's soul will do the impossible to defend her children and seek justice. But Adriana's fiance Diego Ochoa (David Chocarro), who is confused by Adriana's sudden revival and personality change tries to uncover clues as to what is going on with his beloved. Motivated by his love, Adriana's soul decides to recover her body, but Mónica will resist this until her mission has been completed.