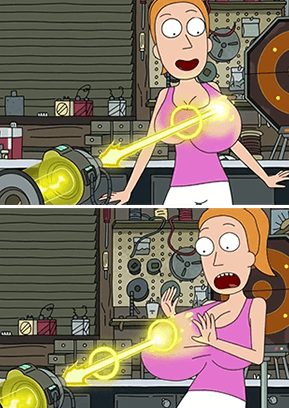 Conveniently, the laser also made her bra bigger.
"What on Earth have you done?! My maguppies became bazongas!"
— Marge Simpson, The Simpsons, "Large Marge"
Advertisement:

A character suddenly finds their breasts enlarged to often immense levels, via Applied Phlebotinum, magic, science, or otherwise. Mostly happens to flat-chested characters suffering from A-Cup Angst, though women on the other side of the spectrum may have it happen as well. When played for fanservice, the actual growth tends to be as important as the final size of the breasts. It is also frequently played for comedy, but this still ends up providing Fanservice. An Overnight Age-Up for women usually guarantees this will happen.

If the expansion is merely caused by puberty, there's a separate trope for that. If the expansion is done on a meta-level, see Adaptational Curves. An alternative is Fake Boobs. Usually leads to Gag Boobs. For the whole body see Inflating Body Gag.