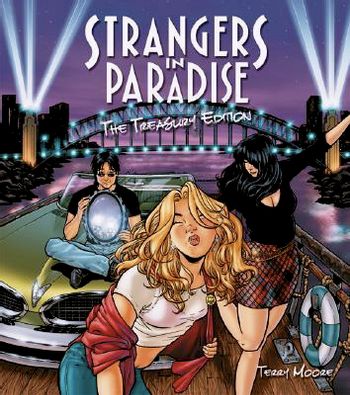 The cover of the Treasury edition showing David, Katchoo, and Francine.
"I can sniff out the potential SIP fans, those looking for something different, some character driven drama with fear and loss being the kryptonite and love being the hero. This book will always continue to draw new readers in."
— Guest review of Strangers in Paradise from "The View from Flying Colours"

First there is Francine, a nice but insecure girl who dreams of a perfect marriage and cannot quite let go of her Jerkass ex-boyfriend. Next there is Katchoo, her Darker and Edgier best friend who is madly in love with her. Finally there is David, a sensitive young man who is in love with Katchoo despite her constant (and harsh) rejections.

Then there is the Mafia, who Katchoo used to work for. Some of them want her back, others just want her head.

That is how Strangers In Paradise starts. First published by Antarctic Press in November 1993, the series moved by Abstract Comics, creator Terry Moore's own company, between 1996 and 2007; it consists of over 90 issues. It is generally acknowledged as a Slice of Life classic, although the occasional vergings into crime drama were not quite as well-received, and it is frequently hailed as the number one comic book to give to your girlfriend. What that means is a bit unclear, but it probably means something.

Not to be confused with the film Stranger Than Paradise or the video game Stranger of Paradise: Final Fantasy Origin.

Strangers In Paradise contains examples of: