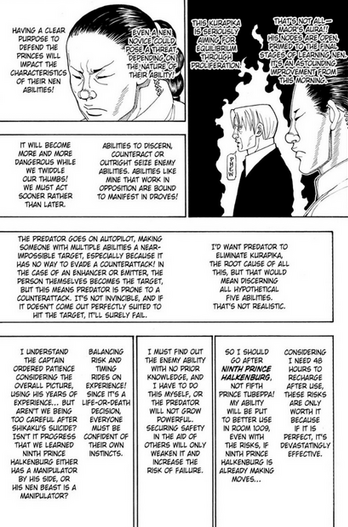 This is what happens when a comic's story literally transcends the capacity of the page to contain it (or at least, when the author thinks so).

In a Textplosion, the comic becomes an illustrated novel, or even a novel without any illustration at all. Note that this does NOT include comics which are crammed with word balloons or narration; that would be a Wall of Text. If the format is still recognizable as a comic (that is, most panels having things happening in them), as opposed to a glorified novel with a few pictures or even none, you have not witnessed a Textplosion.

Causes for the shift can be rather diverse, to include such things as the plot mushrooming out of control, the author deciding they can better express themselves in pure text, or simple artistic laziness.

This is not necessarily a bad thing, depending on the nature of the story and whether a Textplosion is intended as its own sort of plot device. However, a sudden or long-term shift from graphic art to Textplosion, regardless of quality or content, often results in losing large portions of readership — since, after all, they came to read a comic.