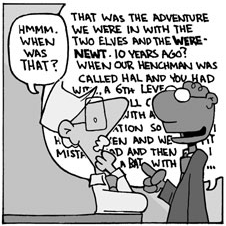 A character in a comic talks, on and on and on, but the exact content's not important. Or else no one is listening.

Their blathering is given in a Wall of Text—often as the backdrop—but the text is obscured with Speech-Bubbles Interruption (whether by other speech bubbles, the characters themselves, or some other visual element) so that the reader knows the complete text is not important.

Long Speech Tea Time can have actions that obstruct the bubbles.