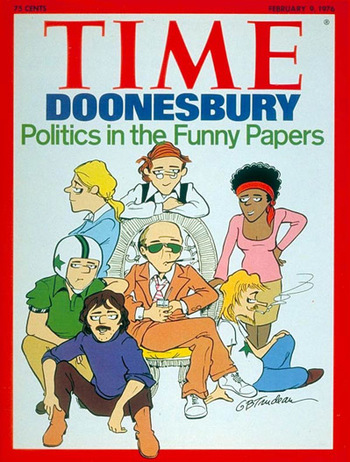 The main cast in 1976.note Clockwise from top: Mike Doonesbury, Ginny Slade, Zonker Harris, Uncle Duke, Mark Slackmeyer, B.D., Joanie Caucus.
"I can only try to keep the characters interesting; it's up to the readers to decide whether they're still relevant."
— Garry Trudeau
Advertisement:

Doonesbury is an American Newspaper Comic strip written and drawn by Garry Trudeau, which mixes political satire with college satire and later soap opera plots. A long runner (51 years and counting, 49 if you don't count the 1983–84 hiatus), the strip involves a cast of hundreds.

It began in 1970 as a satire of campus life, set at fictional Walden College in Connecticut and starring nerdy Mike Doonesbury and his perpetually helmet-wearing jock roommate B.D.; within a couple of years the main cast expanded to feature Zonker Harris, a hippie slacker; Mark Slackmeyer, a left-wing radical; Joanie Caucus and Barbara Ann "Boopsie" Boopstein, Mike and B.D.'s respective girlfriends; and Zonker's "uncle" Duke, who was a stand-in for writer Hunter S. Thompson. While the strip had its genesis mocking college life, Doonesbury really found its footing when it expanded into full-blown political satire. B.D. joined the military (to escape having to write a term paper) and Uncle Duke got himself an ambassadorship to China, which led to him getting his own sidekick, the long-suffering Honey Huan.

Despite the expanded scope of the series, the characters remained college students for about 13 years, with the only real change being the group moving off campus into a nearby commune. This changed with a two year Series Hiatus in 1983-1984; Garry Trudeau came up with the idea of doing a musical based upon the strip which centered around the graduation of the characters from college. After a brief run on Broadway, the strip returned, now moving in real time as the characters grew older, married, had kids, divorced, and died. The strip also became more biting with its political satire, with increasing appearances by television reporter Roland Hedley (who was introduced prior to the hiatus) and surrealistic storylines like Hedley's tour of Ronald Reagan's brain and Mr. Butts, a life-sized talking cigarette who shills for the tobacco industry.

The strip won Trudeau the Pulitzer Prize for Editorial Cartooning in 1975, the first of only two daily comic strips to have ever won that award, the other being Berke Breathed's Bloom County in 1987. A one-shot Animated Adaptation, A Doonesbury Special, was produced in 1977; it won a Jury Special Prize at Cannes and was nominated for the Academy Award for Best Animated Short Film in 1978.

Doonesbury is generally considered liberal on the Strawman Political scale. It's so well-known for its political content that some papers choose to run it on the editorial pages rather than the comics pages, sometimes opposite Mallard Fillmore. (And for some inexplicable reason, the Washington Post runs the strip on its gossip page.)

In Britain, the strip is carried in The Guardian, which tried to drop it in 2005. This did not go down well.

A Doonesbury archive dating back to at least 1970 can be viewed at GoComics.com.

Trudeau put the strip on a "temporary" hiatus in 2013 to work on his Amazon TV Show Alpha House. The show's popularity ended up pushing the hiatus further out, and new strips have only appeared on Sundays since 2014, with reprints of older strips running the rest of the week.

This strip includes examples of: