The cast of the comic strip Doonesbury. Due to the sheer number of characters and the frequent overlap between Cast Herds, the characters are divided by the decade they were introduced, with the exception of the original core cast. 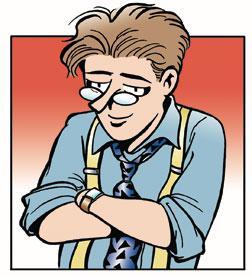 The main character of the strip for most of its run, Mike started out as a student at Walden and Casanova Wannabe and later turned into Walden Commune's voice of reason. After college he married J.J. and worked as a New York Adman, until he lost his job and J.J. left him. Mike then moved to Seattle with his daughter Alex, met and married second wife Kim Rosenthal and is currently running the website MyVulture.com with Kim. 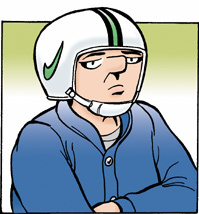 The star quarterback, and hardcore conservative, at Walden and Mike's roommate in the beginning. Enlisted in The Vietnam War to get out of a term paper and has been in every war since. Has been in a relationship with Boopsie since her introduction and married her in the early nineties. Wore a helmet of some kind constantly until 2004, when he got his leg shot off in Iraq and lost the helmet at the same time. Currently works as Walden's Football coach. 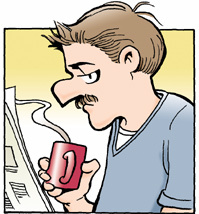 Mark started off as a protester, but eventually segued into a hardcore liberal and DJ. Eventually moved on to NPR, where he works to this day. Later found out he was gay and started dating Chase, eventually marrying him until their divorce a few years ago. 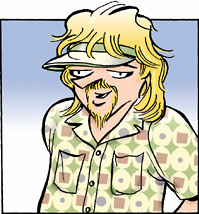 A hippie who spent his 9 years at Walden avoiding graduation, tanning, and generally slacking off. After graduating, he mooched off of Mike and J.J. before enrolling in Baby Doc Medical College, before becoming Mike and J.J.'s live-in nanny. They eventually fired him after Mike lost his job and Zonker moved back in with his parents before moving in with B.D. and Boopsie as their nanny, where he remained for a good period time, although he was forced to get a job as a waiter to bring additional income to the house. These days he owns a (legal) cannabis farm with Zipper. He's also a lord after buying a lordship in the 80's. 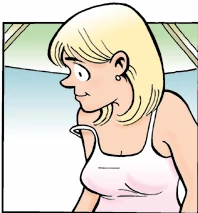 A cheerleader and B.D.'s girlfriend. Became an actress after graduation, albeit in minor roles. Was originally incredibly ditzy but gradually matured over the years. Currently lives at Walden with B.D., their daughter Sam and (formerly) Nanny Zonker. 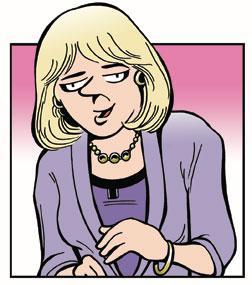 A housewife who ran away from her husband and daughter and was picked up by Mike and Mark while the duo were on a road trip. A feminist, she brought feminism to the local day care center before moving on to Berkeley and getting a law degree. During this time she met her second husband, Rick, and had another child with him. She currently worked with Congresswoman Lacey Davenport until Lacey contracted Alzheimer's. Joanie has recently come out of retirement to guide Real Life Senate candidate Elizabeth Warren's campaign.

Bernie
Mike's college lab partner who had a habit of making transformation potions, Bernie graduated and joined Apple before splitting off on his own and starting his own software company. He hired Mike and was the reason Mike moved to Seattle, and financed Mike's first business, Mikim Inc., for a while. He was also one of the founders of Walden Commune. 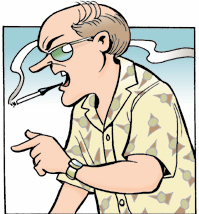 Zonker's honorary Uncle who started out as a writer at Rolling Stone before moving on to Governor of American Samoa, then Ambassador to China and… well, so many other careers that it would take most of this page just to list. Duke will do anything to make money and has absolutely no moral compass and half the time no clue. He's also a massive drug fiend to the point where they barely affect him anymore. Currently working as a lobbyist with his son Earl. 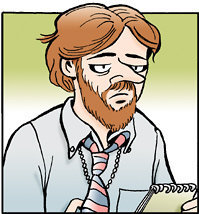 Joanie's husband who was a writer for the Washington Post for most of the strip— until he was fired a few years ago for no particular reason. He's currently a blogger for the Huffington Post and is constantly frustrated with his son. 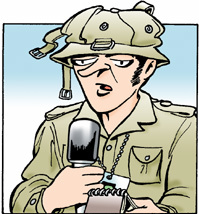 A reporter that initially worked with Time on an article about the current campus trends. He's since switched to network TV and Channel Hopped, eventually sticking with Fox News. He currently has a Twitter account

, which he plugs at every opportunity. 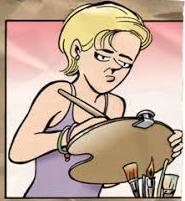 Joanie's daughter, who reappeared later on as freshman college student and was engaged to Zeke Brenner before breaking it off. She later married Mike and became a performance artist in New York, giving birth to their daughter Alex on live television. J.J. later left Mike and Alex and ran away with Zeke before eventually moving to Seattle with him. She later married Zeke. 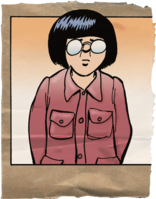 Duke's translator during his tenure as ambassador, Honey fell in love with Duke and followed him to America and through the rest of his schemes. Eventually left him in 2005 and stayed behind to help with the clean-up of Hurricane Katrina. Worked for the Beijing Olympics Committee; most recently seen as a spokeswoman for the Chinese government. 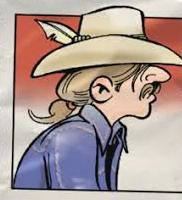 A stoner and complete layabout who worked as Duke's caretaker and was J.J.'s fiance until he burned down Duke's house when lighting up a joint. He later ran away with J.J. and eventually married her, to everyone else's displeasure. 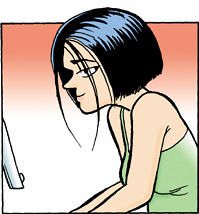 First introduced as the last baby airlifted out of Vietnam, she was adopted by the Rosenthals. She appeared again briefly in the '80s as an honor student dealing with racial issues before reappearing for good as a twenty-something tech wiz. Kim is a Gen-X programming genius and Mike's second wife.

Lacey Davenport
A kindly old lady who worked as a Congresswoman. Lacey was a very nice lady who was fair, balanced, and honest to a fault, if a bit out of step with the times. She eventually had to leave the office when she contracted Alzheimer's. She eventually passed away and was reunited with her husband, Dick.
Dick Davenport
A conservative just like his decades-long friend and later wife. Dick was always supportive of his wife and was an avid bird watcher. He died trying to get a picture of the rare Bachman's warbler, and managed to capture it in his final moments.
Nguyen Van Phred

A terrorist during the Vietnam War where he met B.D.; after being stranded together with a beer cache the two became fast friends. After the war, Phred lobbied for his people before becoming the Vietnamese U.N. Ambassador. He later opened up a club in Vietnam in the 90's and gave tours before becoming head of a Nike factory.

Ginnie Slade
Joanie's roommate during college. Currently married to her long-term boyfriend, Clyde, and trying to keep him in check.
Clyde
Ginnie's freeloading boyfriend and later husband. Eventually founded his own successful cookie company and ran against Lacey and lost. Later took Lacey's position after she stepped down, but eventually lost it.
Phil Slackmeyer
Mark's dad. The exact opposite of his son, Phil was a cold-hearted businessman who fully embraced his greed. Eventually divorced Mark's mother and then got remarried four times. He eventually died with Mark by his side.
Alice Schwartzman

A homeless woman who befriended Rick. She later befriended Lacey, who mistook Alice for her long-dead sister.

Andy Lippincot
A man Joanie had a crush on until he revealed to her he was gay. They remained on good terms. He eventually contracted AIDS and died a few months after. Later returned as a ghost to reveal Mark's latent homosexuality to the latter.
Sid Kibitiz 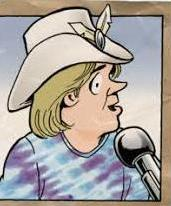 A singer and activist who started out in the strip during the 70's, retired early, and then made a comeback during the 80's. Currently a Cell Phone ring tone artist and file sharing activist.

Joanie and Rick's son, he started out as a gifted little boy who eventually enrolled in Walden at 17 once the college stopped requiring a High School Education. Eventually became Zipper's best friend and the two participated in zany schemes together until graduation. Jeff didn't do much after that, after flunking out of his CIA training, and eventually got back into the CIA in a desk job. He eventually rose out of it by making a name for himself as the legendary Red Rascal while doing nothing at all, eventually landing him a mercenary job before he was fired from it. A book deal followed, along with a massive payday, but Jeff soon found himself back with his parents. 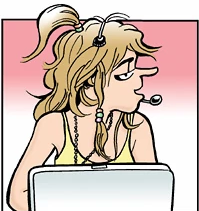 Mike and J.J.'s daughter. She started out as a nameless baby but around the time J.J. left graduated into Mike's precocious computer wiz daughter, which stuck throughout her teen years. Currently a post-grad at M.I.T. and has recently married war veteran Toggle and has two sons by him.

Ray Hightower
B.D.'s war buddy since the gulf war and replacement after B.D. lost his leg. Recently sent home after taking multiple blasts. More at home on the battlefield than in civilian life.
Samantha "Sam" Boopenstien
B.D. and Boopsie's daughter.
Earl
Duke's son, he started off as another kid in the orphanage who DNA test confirmed was Duke's son and eventually ran off with his Dad for a while before disappearing. Later returned right after Duke lost Honey to bring his dad in on his Lobbying firm.

Zonker's nephew who goes to a much more slacker-friendly Walden. Aspires to follow in his Uncle's footsteps. He surpassed his uncle's staying record and has became a tenured student, though he eventually left Walden and joined his uncle growing legal marijuana in Colorado.

Leo "Toggle" DeLuca
A young soldier who sold CD mixes to other soldiers, he was hit by a mortar and ended up with expressive aphasia and an eye patch. He's currently working through his disorder, while going to college and working in the music industry. He and Alex are now married.
Melissa Wheeler
A mechanic in the army who was raped by her commanding officer and dealt with it in therapy. With B.D. and her therapist's help, she eventually returned to command and was promoted.
Roz
Melissa's fellow mechanic and best friend. Came out a lesbian following the end of Don't Ask Don't Tell.
Elias
B.D's counselor at the Vet Center.
Drew
Alex's roommate at MIT and best friend. Has guys falling for her left and right. 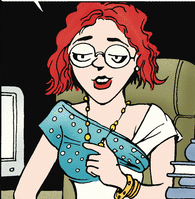