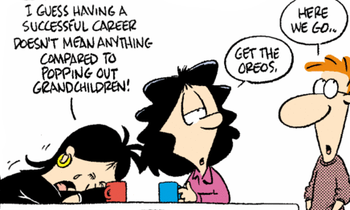 Rhonda doesn't handle her sister's pregnancies well...
"You are asking me to choose between making a house payment and taking care of my sick child, and I do not appreciate it!"
— Karen Pruitt, Home Alone 3

Most definitely an Always Female trope, as well as Truth in Television. Though one can legitimately question whether a man who spends all his time at the office is a 'father' in any but the biological sense.

This one basically boils down to "how dare a woman be good at her career job and have a family, too!" Usually ends in the woman having to give up her job and be a Housewife to cater to the demands of her family. Some sort of Ill Relative or Doorstop Baby may force the issue. If she hasn't already gone through Career Versus Man, she'll go through this one. If a husband is present, asking him to help around the house is out of the question since, you know, his work is more important and he deserves his rest.

Compare Mandatory Motherhood, I Want Grandkids, and My Biological Clock Is Ticking. Contrast Action Mom, who mostly points and laughs at this. Compare and contrast When You Coming Home, Dad?, a male-leaning counterpart where the balance between career and family tips too far in the direction of "career".