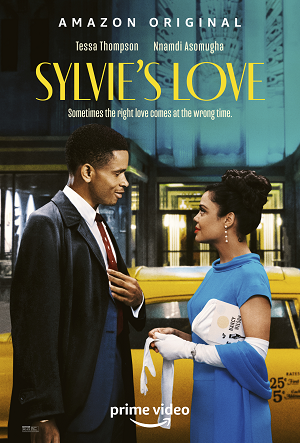 "You know, most people never find that kind of love. Not even for a summer. It's, well, extraordinary."
— Mona
Advertisement:

Sylvie's Love is a 2020 romantic drama film by Eugene Ashe.

Tessa Thompson stars as the titular Sylvie, a young woman in 1950's Harlem who bonds with aspiring jazz saxophonist Robert (Nnamdi Asomugha) over their shared love for music, and the two eventually have a summer fling. When they reconnect five years later, Sylvie now married and Robert's jazz career taken to dizzying heights, they realize that their feelings for each other have not diminished, and the two consider the changes and sacrifices they will have to make if they want to be together.

Sylvie can't take her eyes off of Robert as he plays the saxophone to a sensual jazz tune.

Sylvie can't take her eyes off of Robert as he plays the saxophone to a sensual jazz tune.