Fanfic / Son of the Sannin 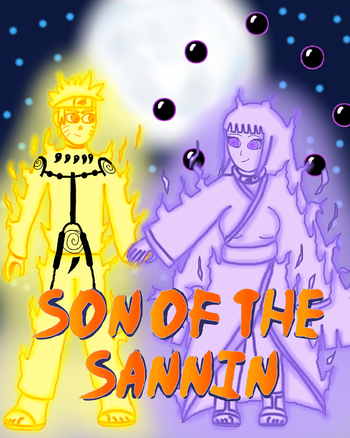 Can I tell you a secret? Don't tell Tsunade or Shizune, because they would get really mad if they knew. But I have plans for you. Great plans. Once I'm done with you, you'll be the biggest pervert Konoha has ever seen, hahaha! I will teach you everything I know so no girl will be able to resist your charms! You'll be a legend second only to yours truly! [...] Oh yeah, and you'll be a great ninja too. I guess that's important as well.
— Chapter 1: Jiraiya, talking to a sleeping baby Naruto.
Advertisement:

Son of the Sannin

by Ander Arias is an Alternate Universe Naruto fanfic, with an interesting premise: What If? Naruto was raised by Jiraiya and Tsunade, and what if the Sannin were around Konoha during the years he grew up? Prepare to embark in an amazing journey as we get to see how Naruto's life turns out under the care of everybody's favorite pervert sage and his blonde gambler friend.

The story begins shortly after the night the Kyuubi's attack on Konoha. In the aftermath, Hiruzen Sarutobi calls Jiraiya to his office to let him know that, as per the will of Minato and Kushina, he is now Naruto's legal guardian. However, Tsunade bursts in and demands that she is assigned as Naruto's guardian, as she is his only living relative. To break off the argument, Hiruzen suggests that the two share the boy's custody and live under the same roof to raise him together. They're not amused at the idea, but ultimately agree. You can only imagine how things will go from then on...

While it comes across as a traditional Fix Fic at first, it quickly develops into a very interesting Alternate Universe that still stays true to the spirit of the series, even making efforts to fill the numerous plot-holes left in canon, and exploring several interesting What If? scenarios for the events and characters. It goes both ways, since even though the intervention of the Sannin does solve many of the problems and averts some of the canon tragedies, it also makes way for others to happen, creating a perfect balance to keep it interesting.

centered on Hanabi Hyuga, and another called The Two Twisted Timelines

, focusing on Canon!Sasuke Uchiha, two years after the end of the Fourth Ninja War, somehow ending up stranded in the Son of the Sannin timeline.

Now with a character page. Please move the character tropes there.

Son of the Sannin provides trope examples of: