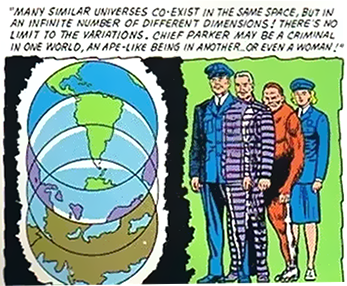 The criminal and the ape-thing, OK. But a woman?! That's just silly.
"Penny, while I subscribe to the many worlds theory which posits the existence of an infinite number of Sheldons in an infinite number of universes, I assure you in none of them am I dancing."
— Sheldon Cooper, The Big Bang Theory
Advertisement:

A story in which the characters we know are seen in a reality that's somehow different, often disturbingly so. If they can access multiple alternative universes at the same time, that's The Multiverse.

Sometimes everyone has an Evil Twin. Other times, everyone has a twin that's just a little different. Allows the goodies to be baddies for an episode, or for half of the cast to be killed — but not really. Sometimes it's just part of Side-Story Bonus Art.

Given a long enough run, any series based on superhero comic books will run into these.

This trope is not to be confused with the following:

Another type of Alternate Universe is that which doesn't take any of the characters, but instead takes concepts, or machines. Such Alternate Universes are uncommon, but exist. Gundam is the perfect example, with no less than seven separate universes, all of them rehashing essentially the same plots and concepts — in particular, the conflict between those living in space and those living on Earth. With giant robots.

This trope is a common excuse for game masters to use when importing player characters from one tabletop role-playing campaign to another.

Compare with Masquerade, where a world might look the same, but something hidden makes it different. See Doppelgänger Gets Same Sentiment for examples wherein someone from one universe projects their feelings for their version onto a different universe's version.