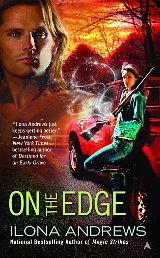 Go brush your teeth, brush your hair, put on dry clothes, and get the guns. We're going to Wal-Mart.
Rose Drayton, On the Edge

The Edge is an urban fantasy/romance series written by husband and wife team Ilona Andrews, authors of the New York Times bestselling series Kate Daniels. The series is finished and has four books, each written from the perspective of different characters.

The Broken is the world we live in, where technology reigns supreme and most people believe that magic is no more than a fairy tale. The Weird is the world where magic flows freely and the aristocracy is alive and well. They overlap in the Edge, with a little of both worlds.

Each book follows a different couple with one of them being a side-character from a previous book. George and Jack also show up in the third and fourth books.

In book one Rose Drayton's powerful magic has made her a target in the past. Now she tries to live under the radar in the Edge, raising her two younger brothers, Jack and George, and struggling to make ends meet. A Broken man named William is romantically interested in her, despite her gentle dissuasion. Then a flood of magic-eating creatures invades the Edge, and Rose knows she can't protect her family by herself. At the same time, a blueblood from the Weird named Declan Camarine shows up, determined to marry her.

Book two follows Declan's friend William, a wolf changeling in The Edge's version of the Louisiana bayou, and Cerise Mar, who's just become head of the poor but land-rich Mar clan after the mysterious disappearance of her parents. It turns out that they have common cause—William has been employed by the Weird spy agency the Mirror to retrieve a valuable journal before the Louisianian Hand can, and guess who the Hand kidnapped in order to get the journal first?