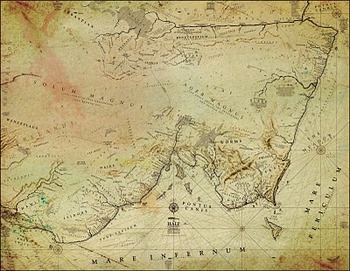 Because why just stick to our world?
"A long time ago, in a galaxy far, far away...."
— Star Wars' famous opening text crawl
Advertisement:

A constructed world is a completely fictional setting, rather than our world in The Future, another planet in our galaxy, or an Alternate History. The heroes of its stories are usually the locals, who neither have nor need a connection with our present-day Earth. In other words, a world that is not obligated to have a connection to a standard existing planet like present day Earth.

This world might be built from standard components, but there is deliberate Worldbuilding going on. It may or may not have a Fantasy World Map. The world may have been based on Earth in a lot of aspects early on, but may have gone through an Earth Drift to make it more distinct.

As one of the most common fantasy settings, some form of Functional Magic is typically present, but this isn't required: constructed worlds exist that have little or no magic. Most High Fantasy takes place in constructed worlds, as well as a great deal of Low Fantasy and Heroic Fantasy.

Compare A Long Time Ago, in a Galaxy Far, Far Away..., usually used in science fiction, where there are multiple worlds all separate from Earth. Contrast Magical Land, where the focus is on visitors to the setting and Like Reality, Unless Noted, and Alternate Universe and Alternate Timeline, where the fictional world coexists with "our" real one. Earth All Along is a subversion of this trope. A world still called Earth but otherwise similar to a Constructed World is a Fictional Earth.