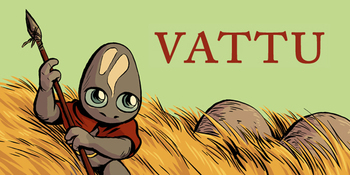 I am from Ata.
River and Grass.
The Hunt and the Cycle.
A thousand generations.
Forever.
Until Sahta.
Advertisement:

Set in the world of Overside, Vattu

is the story of the eponymous member of a tribe of nomad hunter-gatherers whose lives are disrupted by forces of change. The story follows Vattu as she is taken to a foreign society, and gradually accumulates other characters — a struggling artist, a member of a secret society, a young apprentice in an alchemical enclave, and many more.

The webcomic consists of four books.

Book One, The Name and the Mark, develops Vattu's origins in her tribe of those marked in white, with the various struggles that can exist in that context. By the end of the chapter, she has been sold into slavery to the imperialistic Sahtans. Later, it introduces the War-Man and intersperses flashbacks to his story between segments of Vattu being taken to Sahta. Over the course of the chapter Vattu and the War Man become friends, get separated, and then are reunited.

Book Two, The Sword and the Sacrament, introduces a whole host of new characters, and the select stories of denizens from varying classes are explored. Having escaped servitude at a Sahtan house, Vattu now steals and hides to live, receiving further martial training in secret from the War Man and encountering many other residents of the city.

Book Three, The Tower and the Shadow, begins with a shift of focus upon the Emperor Arrius, and shows hints of the history behind the empire and how the present world has come to be.

Book Four, The River, follows the various factions fighting for control of Sahta in the aftermath of the death of Emperor Arrius.

Vattu creator Evan Dahm has also completed the webcomics Rice Boy and Order of Tales, all of which are set in Overside.