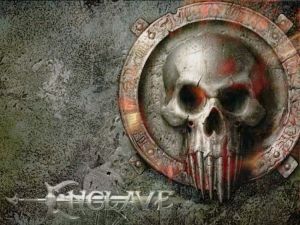 Thousands of years ago, the kingdom of Celenheim was invaded by the Evil Overlord Vatar. Just as The Horde was about to triumph, The Arch Mage Zale arrived to save the day. After killing Vatar, he used his magic to create an abyssal Rift in the ground around Celenheim, turning it into the eponymous enclave surrounded by the darkness-infested Outlands. Over the centuries of peace that followed, the people of Celenheim grew proud and forgot about the evil that lurked beyond the chasm... but when the Rift suddenly began closing up again and the forces of darkness came back, they came back angry.
Advertisement:

Also known by its working title Into the Darkness, Enclave is a Dark Fantasy Action-Adventure game released by Starbreeze Studios (who later made the The Chronicles of Riddick video games) for the Xbox and the PC in 2002. Its most notable feature is a complete aversion of No Campaign for the Wicked: the game consists of two full-length campaigns, one where a nameless hero vanquishes evil and saves Celenheim, and the other where a nameless minion leads the Darkness to the triumph they were denied centuries ago. As you progress through either campaign, other fantasy characters join your group, though you can only steer one of them during missions.

A sequel was announced in 2003, but with no news whatsoever since then, it seems to have become an Orphaned Series. The original game was, however, ported onto the Wii in 2010. A remaster by Ziggurat Interactive was announced in 2021 for PlayStation 4, Xbox One and Nintendo Switch.