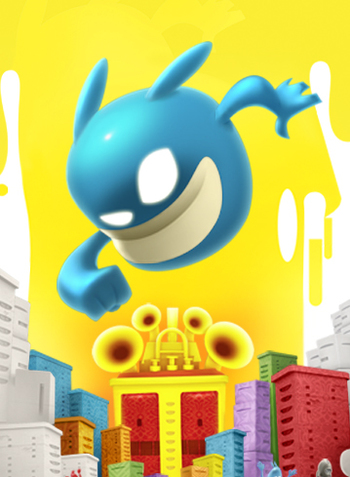 Our hero, ladies and gentlemen. Don't worry, you'll all enjoy yourselves!
Advertisement:

de Blob is a Platform/Puzzle Game developed by Blue Tongue Entertainment and published by THQ for the Wii in 2008. It originally started out as a project by a couple of students in Utrecht, The Netherlands, which explains the name of the game and the main antagonist corporation.

The premise of the game is that you start out as a clear ball of water, which has to seek out enemies called Paintbots to change colors between red, blue, or yellow, which can also be combined to make new colors. Afterwards, all you have to do is merely touch the item you want to paint for the entire surface to be your current color. As you destroy more Paintbots, you continue to grow in size to a max of 100 "paint points" which are used to paint buildings or destroy enemies. Also, while you are free to paint, there are several missions you have to do before you can proceed to the next area.

Initially a lively and colorful city populated by its equally colorful and diverse citizens, the Raydians, Chroma City is suddenly invaded by the INKT Corporation. A corporate military dictatorship, INKT is led by the villainous Comrade Black and dedicated to the eradication of color through its "War on Color". Chroma City quickly falls to the invading army of Inkies and color draining Leechbots, leaving its landscape barren, its flora withered and its fauna in hiding. The citizens are rounded up and turned into Graydians by encasing them in homogeneous gray prison suits with their only distinguishing feature a bar code on the back of each shell. When the last remaining pocket of resistance, the Color Underground (The Professor, Arty, Biff and Zip), are cornered by INKT forces, de Blob appears, rescuing them and embarking on a Color Revolution.

There is an iPhone port available.

A sequel, de Blob 2, was released late February 2011. Comrade Black is trying to drain all the color from another city on Planet Raydia known as Prisma City, and Blob, his new robotic sidekick Pinky, and the Color Underground have to stop him again. Unlike last time when INKT had completely taken over and the Underground had to take everything back, in this one the heroes are more on the offensive, chasing Black down as he keeps coming up with new schemes, though he has still taken over a lot of Prisma City when Blob gets there.

The series' IP was purchased by Nordic Games (now THQ Nordic) from THQ on Halloween 2014,

over three years after the second game was published. In April 2017, the first game was ported to PC via Steam

followed in June. de Blob was then released on Xbox One and PlayStation 4 in November 2017, while the Nintendo Switch version was released in June 2018.

The main character with an amazing ability to absorb paint that can color buildings and restore life to the world, which he uses to defeat INKT Corporation.

The main character with an amazing ability to absorb paint that can color buildings and restore life to the world, which he uses to defeat INKT Corporation.