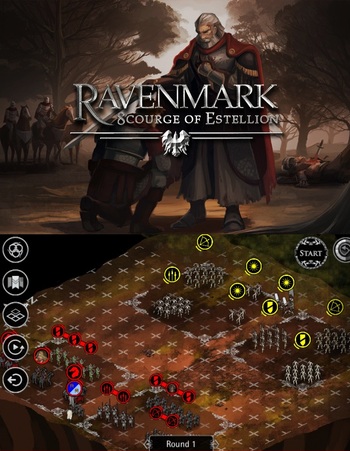 Ravenmark: Scourge of Estellion title screen, and Ravenmark: Mercenaries combat.
Ravenmark is a series of Turn-Based Strategy games for iOS consisting of Ravenmark: Scourge of Estellion (2011) and Ravenmark: Mercenaries (2013). The games take place in a Medieval European Fantasy‎ setting in the world of Eclisse. The titular Empire of Estellion (whose people are called Tellions) is the largest and most powerful nation in the world. It's notable that, according to the in-game Codex, the Empire was founded on the principles of meritocracy, where any commoner could, through many years of military (22 years) or administrative (36 years) service, attain temporary nobility (no more than 2 generations), and any family able to maintain their noble status for 10 uninterrupted generations would be granted the permanent status of a noble House. Another major power in Eclisse is the neighboring Commonwealth of Esotre, whose inhabitants (called Sotrans and composed of humans and dwarves) prefer a rational approach to things and promote science and Magitek. Both nations are constantly being raided by the wild Lyri tribes.
Advertisement:

Battles are turn-based. The player is able to give no more than 6 pre-battle orders per turn, although behavior orders from previous turns (e.g. Advance Northwest) continue to take effect. However, computer players are not limited to 6 orders per turn and are able to give orders during the battle phase. Most powers use small-units called Daggers that take up 1 square. Usually, Daggers can be joined with Daggers of identical unit type to form two-Dagger formations called Deuces and three-Dagger formations called Trines. There are usually bonuses for Deuces and Trines, but, unlike Daggers, they can be flanked and must be facing the enemy to attack. Commanders (usually key story characters) are attached to specific Daggers and usually have certain abilities. In the first game, units don't earn experience. In the sequel, squads earn experience for successfully completing contracts or winning battles.

The first game has a deep and rich storyline revealed through a series of campaigns. The focus of the campaigns is on a newly-discovered threat that has been lying in wait for centuries. The nation of Kaysan has been hiding in the impassable Cardani swamps amassing their human and elven forces in order to strike at the unsuspecting Tellions. The Kaysani humans are descended from the exiled Carsis nobles who used to rule the lands that now make up the Empire and are burning for a chance to take them back. So, when the Kaysani, armed with flamesoul magic, and their rat-like elven hordes form the Reconquista and suddenly invade the Empire, very few can do anything to stop them, especially since the Empire is currently undergoing a Succession Crisis following the death of Emperor Sergius Corvius and, in fact, there may be Kaysani allies in the Imperial court itself.

The sequel takes place six years later but doesn't feature much of a story beyond a basic setup, as the game is primarily focused on multiplayer. Basically, after the events of the first game, the Empire is no longer as powerful as it was, controlling only a fraction of its former lands. The alliance between Estellion and Esotre has evaporated, and both nations now view each other with hostility. The remaining Kaysani forces have retreated to East Isle and have joined with the rebellious tribes of the Faiths to form a new nation called the Varishah Federation opposed to both the Empire and the Commonwealth. This three-way conflict forms the setting of the second game. The player is put in command of a group of mercenaries out of the Twin Cities (a former Imperial city) and can take out various contracts or engage in small-scale battles for money.

Ravenmark: SOE has since been ported to PC via Steam, while Ravenmark: Mercenaries is no longer available on the app store.