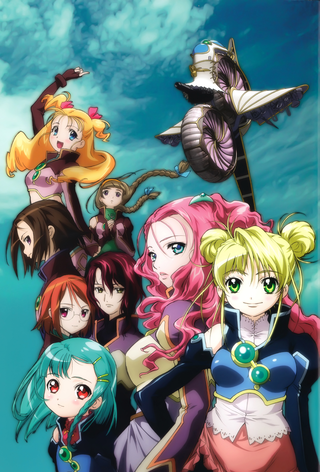 "I came here to fight."
Advertisement:

In the world of Daikuuriku, everyone is born female, and chooses which sex they wish to become at age 17 with a trip to a magical spring. In this world, the peaceful theocracy of Simulacrum is guarded by magical flying machines called "Simoun," which can only be piloted by young girls who haven't chosen a sex yet. The Simoun can activate a magical power known as "Ri Maajon" (by inscribing enormous magical glyphs in the sky) that can destroy large numbers of enemy aircraft at once.

When the industrialized nation of Argentum decides that it needs to invade Simulacrum to acquire the secret of the Simoun, war breaks out, drawing the Simoun pilots into a lopsided battle. Because the war is raging, the Simoun pilots are granted an exemption from going to the spring for as long as they're willing to keep flying. One such pilot in particular vows to stay with her squadron until she becomes the ultimate Simoun pilot, and badgers her squadron-mates to do the same...

Simoun aired from April to September 2006 on Japanese TV, with an all-star (and all-female) voice acting cast, and two stage actresses portraying the series' romantic leads. The series has been licensed, and the (subtitled only) DVDs are available in North America.

A serial manga of the same name was released in Yuri Hime, with a completely different storyline.

No relation to anyone named "Simon" with his name pronounced "See-MOAN", nor to the antihero protagonist of El Filibusterismo, although that is his name (yes, including the U). Quite possibly related, however, to the 30s airplane

, which a certain French writer crashed into the Sahara desert.